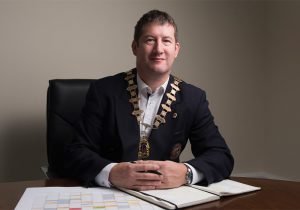 Des Ryan from Westport has been elected as District Governor of Lions Clubs International in Ireland. He succeeds Bernard Black of Antrim Coast Lions Club and will lead 2,150 Lions who are members of 103 Clubs in District 133 of the word-wide organisation.

Born in Dublin, Des is grandson of the late Terry O’Sullivan, journalist and diarist and is a nephew of the writer and broadcaster Nuala O’Faolain.

He moved to Westport with his parents in 1980 and after graduating in Construction Studies at Galway RTC, he worked in the structural steel industry prior to establishing his own company in 2004.

Des initially joined Lions Clubs International through Leos, its youth organisation. He was the founding president of Westport Leo Club and went on to become the youngest member of Westport Lions Club, later serving as secretary and club president. He headed the North West Zone of Lions Clubs before his election as Vice District Governor.

As District Governor, Des plans to enhance the national understanding of Lions Clubs ethos and activities.

‘Lions Clubs are active in almost every community on this island, supporting the vulnerable and those in need through a very wide range of projects. At national level we are engaged in health, education, community support, youth development and sport while our District also supports major international humanitarian projects undertaken by the Lions Clubs International Foundation’, he says.

He adds that Lions Clubs in Ireland has responded to the Covid 19 pandemic by supporting local communities and by contributing €95,000 to purchase and distribute 100,000 Hero Shields to front line workers.

‘We need to create a greater public awareness of our activities, so that we can attract new members and raise the necessary funds’, he  says.

As District Governor, Des also plans to enhance the use of communications technology by Lions Clubs, to offer training to members and leadership opportunities to a new generation of Lions Clubs officers.

A keen sportsman who has played soccer and GAA, Des enjoys playing guitar, singing and gardening. He is married to Sara (they met at a Leo Club meeting) and they are parents to Catherine (26), Jessica (21), Emma (13) and Ben(11) and grandparents of Elisagh (4).