The opportunity I bring to you, Lions, is this: … Will you not help me hasten the day when there shall be no preventable blindness; no little deaf, blind child untaught; no blind man or woman unaided? I appeal to you Lions, you who have your sight, your hearing, you who are strong and brave and kind. Will you not constitute yourselves Knights of the Blind in this crusade against darkness?

Since 1990, Lions worldwide have raised US$415 million through two SightFirst fundraising campaigns to help provide vision for all.  In that time Thurles Lions Club and Leo Club have contributed c. $40,000 towards these programs.

As a continuation of this program and in celebration of 100 years of Lions Clubs International, Lions Clubs on the island of Ireland will raise €150,000 between now and 2017 to support the work of the Irish Guide Dogs for the Blind and Guide Dogs Northern Ireland.

Born in Tuscumbia, Alabama, USA, in 1880, Helen Keller developed a fever at 18 months of age that left her blind and deaf.  With the help of an exceptional teacher, Anne Mansfield Sullivan of the Perkins School for the Blind, Helen Keller learned sign language and braille. A few years later, she learned to speak. As an adult she became a tireless advocate for people with disabilities. And in 1925, she attended the Lions Clubs International Convention and challenged Lions to become “knights of the blind in the crusade against darkness.”

The Lions accepted her challenge and our work ever since has included sight programs aimed at preventable blindness.

For nearly 100 years, our members have worked on projects designed to prevent blindness, restore eyesight and improve eye health and eye care for hundreds of millions of people worldwide. Lions volunteer to take part in sight projects that have: 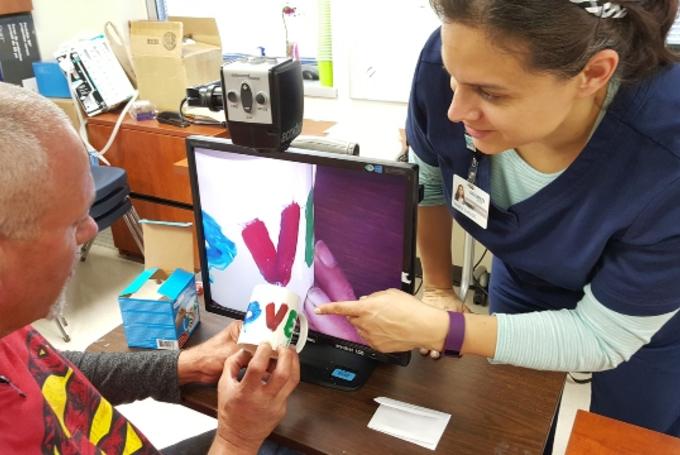 Since its inception in 1990, the SightFirst program has played a key role in reducing global blindness. It is only through the collaborative efforts of Lions, our partners, local health authorities, eye care professionals and other non-governmental organizations that SightFirst has been able to help 30 million people have improved or restored vision. SightFirst serves as a leading member of VISION 2020, the global initiative for the elimination of avoidable blindness.

With a focus on building comprehensive and sustainable eye care systems, SightFirst provides funding for projects that deliver eye care services, build or strengthen eye care facilities, train professionals and build awareness about eye health in underserved communities. Through two fundraising campaigns, Lions are investing US$415 million in the SightFirst program to extend its services to even more people in need throughout the world. With an average cost of just US$6 to help restore a person’s vision or prevent blindness, millions more will be given the gift of sight.

Our sight programs have changed the lives of millions. See our impact through our sight-related videos.

Since 1990, Lions worldwide have raised US$415 million through two SightFirst fundraising campaigns to help provide vision for all.  In that time Thurles Lions Club and Leo Club have contributed c. $40,000 towards these programs.